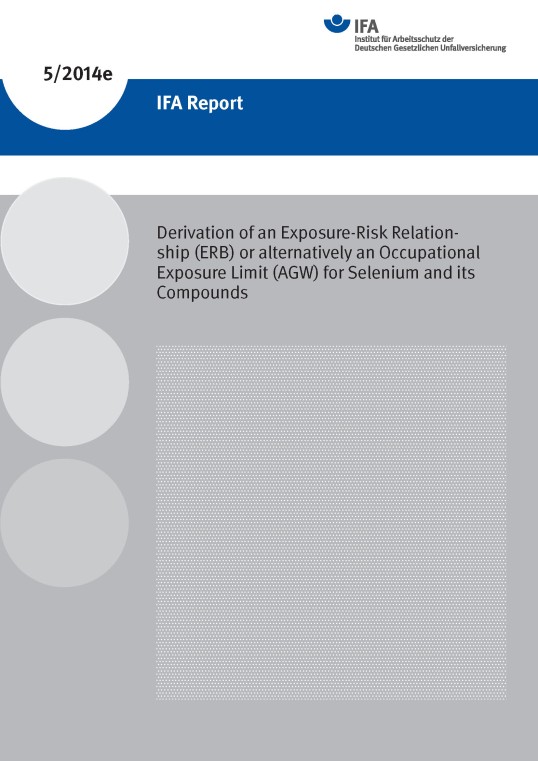 Introduction:
Selenium is an essential element that is present in soil and enters the food chain through plants. Because of its uneven distribution in different geographical regions, the intake of selenium varies hugely worldwide. Occupational selenium exposure can occur in copper smelting and in the production of pigments, glass, rubber, plastics, pharmaceuticals, and electronic devices. The main occupational pathway of exposure is by inhalation.

Objective:
The aim of this epidemiological and toxicological risk assessment of selenium and its compounds is to derive exposure riskrelationships (ERBs) if assessed to be carcinogenic or alternatively, an occupational exposure limit (AGW) based on the most sensitive endpoint, if assessed to be non-carcinogenic and ERBs cannot be derived. Literature that focused on endpoints related to two main potential effects, diabetes and cancer, was reviewed and evaluated.

Diabetes:
Evidence from 14 human studies, including clinical trials of selenium supplementation, case-control, cohort, and cross sectional studies on the association between selenium exposure and type-2 diabetes is conflicting. Three experimental animal studies that administered selenium in the diet investigated endpoints related to diabetes. While these studies provide some insight into biological effects of selenium that might affect glucose homeostasis, they are not sufficient to demonstrate a clear role of selenium in the development of frank diabetes. Mode of action studies reviewed suggest that a U-shaped association between selenoproteins and type-2 diabetes risk might explain some of the apparently contradictory findings in the epidemiology studies.

Cancer:
Evidence from 65 human epidemiological studies on organic selenium compounds suggests an inverse association between selenium exposure and risk of several cancers, especially in men. These data do not provide evidence for any increase in cancer risk associated with intake of organic selenium compounds. Evidence regarding inorganic selenium compounds is inadequate due to a lack of reliable studies. Eleven studies investigated carcinogenicity via the oral route in healthy experimental animals. National Toxicology Program (NTP) studies indicate that ingestion of high doses of selenium sulfide causes liver tumors in rats and mice, but no adequate inhalation studies exist. The available studies were inadequate to address a potential cancer risk in humans under occupational conditions. Selected studies were reviewed that investigated treatment with selenium compounds within the context of initiation-promotion experiments as well as some studies that studied their chemopreventative effects in animal models of different cancers. Results from these studies are conflicting. Depending on study design, timing of selenium exposure during carcinogenesis, and combination with other chemicals, selenium treatment had either a protective role or increased tumor development. The ultimate mechanism of action of the effect of selenium on cancer development has not been established, but mechanistic studies indicate that both low-molecular weight selenium compounds as well as selenoproteins might be involved. Among other factors, polymorphisms in genes encoding for selenoproteins may contribute to the inconsistencies observed in human studies. In numerous studies, sodium selenite, selenate, selenide, and selenium dioxide have been shown to inhibit the genotoxicity of mutagens. By itself, selenium and its inorganic compounds showed some genotoxic potential at high doses, but it is unclear if this activity is expressed at low levels to which humans may be exposed.

Conclusions:
While many studies have investigated the possible association between selenium exposure and the endpoints of diabetes and cancer, no conclusions can be drawn regarding a causal role of selenium in those diseases. Overall the data on cancer and diabetes are not adequate for the derivation of ERBs or an AGW for selenium.