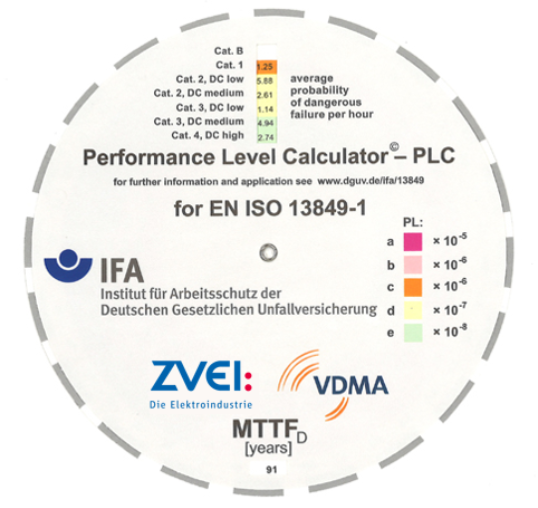 To easily determine the Performance Level (PL) of safety related control systems for machinery the PLC disc can be used. It has been developed by IFA with support of ZVEI (German Zentralverband Elektrotechnik- und Elektronikindustrie - Fachverband Automation) and VDMA (German Verband Deutscher Maschinen- und Anlagenbau e.V.).

How to use the disc

The principles laid down in EN ISO 13849-1 are visualised by means of two movable layers which are fixed in the centre. The Performance Level (PL) can be easily determined by first turning the upper disc until the desired Mean Time to Dangerous Failure (MTTFD) of each channel appears in the lower window. After that chose the desired Category and average diagnostic coverage (DC) besides the upper window and read the respective figures. The displayed value has then to be multiplied by a factor (order of magnitude) according to the colour code; thus you will get the average probability of a dangerous failure per hour (PFHD) of the safety-related control system. The colour code also indicates which PL is achieved. In Category 4, you can use the scale printed on the reverse to determine the PFHD for MTTFD values greater than 100 years.

The revision of EN ISO 13849-1 (formerly known as EN 954-1), including its amendment 1, gives guidelines to develop, validate and certify in a simple way safety-related control systems in the field of machinery. Deterministic and probabilistic requirements are combined in a practicable manner: The Category of the control system (e.g. redundancy and testing) and its probabilistic properties (failure rates of components called MTTFD, diagnostic coverage of fault detection called DC, common cause failure rates) underlie the determination of the "Performance Level" (PL). Markov-models are used to determine the "average probability of a dangerous failure per hour" (PFHD) for designated architectures. The relation is shown in figure 5 and in table K.1 of EN ISO 13849-1.