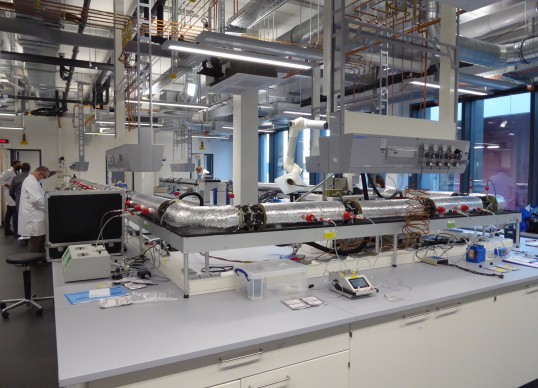 At the new test gas stream of the IFA
Source: IFA

The proficiency testing (PT) is offered alternatively with and without own sampling. Participants may choose whether they wish to perform sampling for aldehydes themselves, or to have the sample carriers supplied to them [1].

Three test gas mixtures with different individual substance concentrations are offered. A test gas mixture consists of three to four aldehydes. The following aldehydes are used: formaldehyde, acetaldehyde, propionaldehyde and butyraldehyde. The concentration for formaldehyde will lie in the range between 0.03 and 1 mg/m³, for acetaldehyde, propionaldehyde and butyraldehyde in the range between 0.1 and 3 mg/m³ each.

1 Proficiency testing scheme with own sampling

At the dynamic test gas stream at the IFA up to 25 participants can carry out parallel sampling.

Participants will receive detailed information on the PT scheme, a description of the apparatus, and the connections for the sampling devices in particular, in good time.

2 Proficiency testing scheme without own sampling

The production of samples for aldehydes is conducted at the dynamic test gas stream of the IFA.

The laboratories may choose from two different sample carriers: