Prevention campaign: "Think of me. Love, your back" 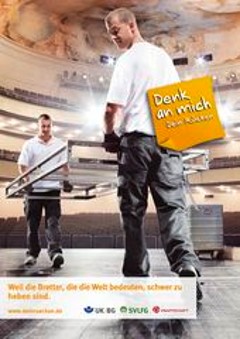 Prevention campaign: Think of me. Love, your back
Source: Kaj Kandler - kombinatroweiss.de

The German Social Accident Insurance launched the "Think of me. Love, your back" campaign in 10 January 2013, with a focus on work-related back stresses.

The relevance of this topic was clear: more than two-thirds of the German population suffer backache at least once in their lives. At the same time, workers and even schoolchildren are exposed to many forms of back stress on a daily basis: a lack of exercise and mental stress are factors, as are for example the moving of heavy loads, working in constrained postures, or caring for patients or relatives.

These were sufficient reasons for a campaign addressing back stress and prevention approaches to it. With the campaign, the bodies responsible, i.e. the German Social Accident Insurance Institutions, the Social insurance for agriculture, forestry and landscaping (SVLFG) and the Knappschaft, aimed to bring about changes both in the conditions in schools and companies, and in the behaviour of the insured individuals themselves. The aim was that of reducing back stress. Attention was focussed here upon physical stresses of all kinds (including lack of exercise) and in combination with mental stresses. The campaign's success was guaranteed by the fact that as in previous campaigns, the bodies responsible have direct access to companies and educational institutions.

At the same time however, its unique selling point, "Think of me. Love, your back" set it apart from the numerous prevention campaigns and activities conducted by other institutions.

The campaign's publicity used humour to make the back the protagonist of the campaign. The back acquired its own voice and reminded its owner of its existence – by means of a Post-It note – before it begins to creak and pinch. With the slogan: "Think of me. Love, your back", it reminded us that ideally we should do a little something every day for our backs.

In addition to poster and advertisement images, this campaign was also offering a range of media on the topic on its website, such as brochures and films. The website also contained very specific information on primary preventive activity at the workplace. At the heart of these resources were numerous events modules, which could be hired free of charge for the conducting of campaign days. The modules enabled back stresses and opportunities for prevention to be demonstrated – a particularly sustainable means of establishing the messages of prevention in people's minds. In addition, a (digital) campaign box motivated companies to conduct activities and supported them in doing so. The campaign box offered accessible ideas and concepts for example that could be implemented individually or in combination, and enabled even small and medium-sized companies to take measures to reduce back stresses, without the need for a large budget.

A literature review to identify and prioritize relevant prevention topics and areas of activity concerning musculoskeletal disorders (MSD) has been commissioned from the German Society of Occupational and Environmental Medicine (DGAUM) in the run-up to the campaign. The literature review can be viewed and downloaded here in English or German (where available).

The results of the study were discussed with experts from a number of countries at the "DGUV Conference on MSD" in Dresden on 16 and 17 October 2009 (programme (PDF, 33 kB) and list of participants (PDF, 17 kB)). The papers delivered at this event and the results of the workshops can be found here.

Based upon these preparations, the key issues and general theme of the campaign were discussed at the 9th Dresden Prevention Forum in February 2010 with the prevention experts and autonomous administration of the accident insurance institutions.

The draft concept document for the 2013/2014 prevention campaigns (PDF, 345 kB) was developed on this basis by a working group of prevention experts with the support of occupational physicians and communications experts. The DGUV's committees have agreed to this concept and now it forms the basis of preparatory work for the campaign.

Think of me. Love, your back