State of discussion of the effects upon health 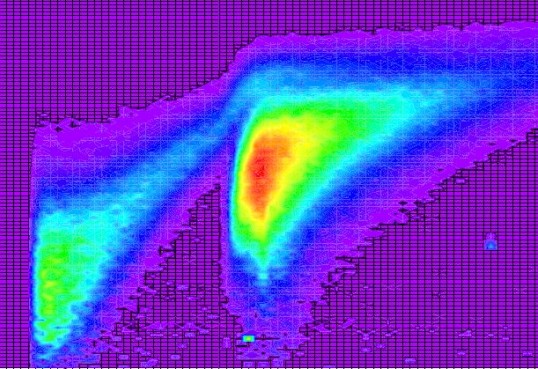 Graphical presentation of the results from a measurement of particle number concentration
Source: IFA

Atmospheric pollution caused by aerosols in the environment and the adverse effect of workplace dust upon human health have been known for centuries. Exposure to dust must be regulated and monitored. A brief outline of the history and development of dust measurement technology can be found in Möhlmann [1].

Dust fractions and their limit values

Parallel to activity in the OSH sector, a possible adverse effect upon health of fine or ultrafine particles in the atmosphere has also been discussed in the environmental context with increasing intensity since the 1990s. In the context of its measurement, the term for particulate matter is defined differently in the German legislation governing the environmental and OSH sectors (PM10 and PM4 respectively) [3]. Correspondingly, "ultrafine" particles may be described as PM0.1. In the public debate, the effects of different particle size classes are frequently attributed to an unclearly defined "particulate", even though the particles belong to different size fractions.

The results of epidemiological studies

In the early 1990s, Schwartz et al. [4] and Dockery et al. [5] reported a relationship between urban atmospheric pollution, particularly with regard to PM10 and PM2.5, and the disease patterns and mortality in the urban areas concerned.

In the years which followed, similar epidemiological studies were published, resulting in stricter environmental legislation governing air quality [6]. Pope and Dockery provide a critical overview of the progress over the past two decades [7].

The results of toxicological studies

It was necessary however for the epidemiological studies to be supplemented by toxicological studies which explain how and by means of what reaction chains and mechanisms within the body the various ultrafine particles or nanoparticles exert an effect upon health, and what damage may ensue. A brief summary of the mechanisms of action of ultrafine particles is provided by Krug [8]; a wider view of the discussion is provided by the report on the BIA's experts' workshop held in 2002 [9].

With reference to the incidence of lung tumours in animal experiments, Roller [11] proposes the particulate volume combined with the particle diameter as a dosage criterion. Unfortunately, the particulates employed have been fully characterized in terms of the parameters stated above in only a small number of toxicological studies.

In addition, animal experiments are problematic, since for example effects caused by the suspension medium appear to be of greater significance when such small particles are involved. Standardization of the test arrangements is still in its infancy, and is being supported for example by co-ordinating activities on the part of the EU [12, 13].

Within the OECD, the "Working party on Manufactured Nanomaterials" is studying chemical test methods for their relevance and applicability to nanomaterials [14].

In the more recent past, discussion has arisen of whether carbon nanotubes (CNTs) are capable of inducing an effect comparable to that of asbestos, where the carbon nanotubes concerned are biopersistent and correspond in their dimensions to the definition of WHO fibres (length > 5 µm, diameter < 3 µm and length-to-diameter ratio > 3:1) [15].

Poland et al. [16] examined the effect of CNTs, some of which had been specifically manufactured for the purpose, in the abdominal cavity of mice. Experiments by Takagi et al. [17], who used a particularly sensitive strain of mice, had a similar objective. Both studies gave grounds for concern that ultrafine fibres of adequate length and biopersistence may cause cancer. Carbon nanotubes which resemble asbestos fibres in their geometry and length were deliberately used in the studies. In addition, results obtained by Shvedova et al. suggest that carbon nanotubes which do not comply with the WHO fibre definition but are instead present in agglomerated form could also have an adverse impact upon health [18].

An overview of more far-reaching toxicological findings is provided by NIOSH in the "Occupational Exposure to Carbon Nanotubes and Nanofibers" Current Intelligence Bulletin of April 2013 [19], and in more generally comprehensible, abridged form, by a dossier produced in May 2011 by the Austrian nano trust project [20].

Of relevance is however not the question of whether materials manufactured specifically for experimentation purposes may have an adverse effect upon health in the laboratory. Of decisive importance is adequate assurance that nanomaterials released at workplaces are not a source of adverse effects upon health. The European Commission therefore explains how nanomaterials are to be dealt with in the context of REACH, and will review this process continually [21]. Within the "Network NanoCarbon" [22] launched and sponsored by the German government, research is also being funded into the effects upon human beings and the environment over the entire life-cycle of the CNTs.

Despite the prevailing uncertainty concerning the impact of nanoparticles, Schulte et al. [10] conclude that sufficient provisional information exists to justify their being treated as hazardous substances. The NanoCommission of the German government reaches a similar conclusion. In its principles for the responsible handling of nanomaterials, Working Group 3 of the NanoCommission thus states the following under Principle 4, concerning the establishment of risk management:

"Until scientifically validated findings are available, a potential hazard of a certain nanomaterial cannot be ruled out. In such cases, the precautionary principle (in accordance with the EU Communication of February 2000) is to be applied" [23].

[11] Roller, M.: Research on the carcinogenicity of nanoparticles and other dusts. BAuA, Project F2083 (in German)

[21] Chemicals - REACH and nanomaterials. Concretision of the European Commission

[23] NanoCommission of the German federal government