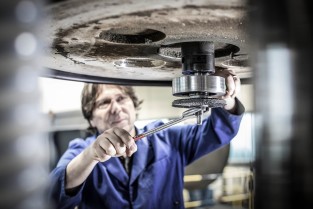 In a state of deep concentration while working at the test laboratory. oSa/ DGUV

In 1981, around 40 years ago, one of the most modern and largest test laboratories for grinding wheels was opened in Sankt Augustin. To this day, it is one of only two independent test laboratories worldwide that carries out its testing in accordance with European standards.

In the test laboratory of the DGUV Test Testing and Certification Body of the Institute for Occupational Safety and Health of the German Social Accident Insurance (IFA), solid grinding wheels with a diameter of up to two metres are rotated at faster and faster speeds until they burst. In fact, one of these grinding wheels is being accelerated right now. A loud bang – followed by silence. Upon opening the guards on the test bench, we can see that the grinding wheel has broken into a number of small and large pieces.

It goes without saying that when a grinding wheel that you are working with is less resistant than expected and suddenly breaks into pieces, this can have potentially fatal consequences. When this happens, the broken pieces of the grinding wheel fly through the air like bullets.

When the grinding wheel burst, the display of the testing device showed a reading of over 5,000 rotations per minute, which is almost double the figure specified by the manufacturer as the operating speed. This means that this grinding wheel has passed the test and fulfils the minimum requirement set out by the safety standard with regards to the bursting speed. As a result, this grinding wheel is classified as safe for use at work.

Over its history, Germany has evolved into a key location for testing grinding wheels

Today, the DGUV Test Testing and Certification Body of the Institute for Occupational Safety and Health of the German Social Accident Insurance (IFA) is one of only two independent test laboratories worldwide that carries out its testing on grinding wheels in accordance with European standards. The second laboratory is based in Hanover. Over its history, Germany has evolved into a key location for grinding wheels: After eight fatal accidents involving grinding wheels were recorded in Germany in 1928, the German grinding wheel committee (DSA – Deutsche Schleifscheibenauschuss) was founded by the German social accident insurance institutions for the metalworking industry in May of 1930. From this point onwards, grinding wheels required an approval and an approval number from the DSA. This continued to be the case until the DSA was disbanded in 1997 and corresponding European safety standards came into force. The Organization for the Safety of Abrasives (oSa) was set up in 2000. This organisation is an association of manufacturers of grinding wheels. The DGUV Test IFA Testing and Certification Body is the designated test facility of oSa.

The journey that led to this began in 1979. This was when the plans to create a new, large test laboratory for grinding wheels in Sankt Augustin were first developed. In 1981, around 40 years ago, this vision was realised – with a total of five test benches for grinding wheels. Since this point, the DGUV Test testing and certification body IFA in Sankt Augustin has been able to test and certify all kinds of grinding tools – from those with a diameter of just a few millimetres to those with a diameter of up to two metres. Today, the site focuses on more recent products and new developments in particular. To make this possible, the measuring devices are continuously updated and adapted. Employees of the IFA also develop testing methods and test benches and play an active role in the standardisation bodies.

Protection against flying parts – not just important for grinding machines

Inspection windows on machine safety doors are generally fitted with at least two panes: The inner pane is made of glass. Glass is not particularly effective at stopping flying fragments, but it rarely gets scratched by flying swarf, which ensures that operators have a clear view of the work they are doing during day-to-day operations. The outer pane is made of polycarbonate, which is a highly resistant material. Thanks to the highly ductile behaviour of polycarbonate, fragments can be stopped effectively. When testing of a product results in both panes of glass being broken or the inspection window coming out of its frame completely, then improvements must be made to the product in question.