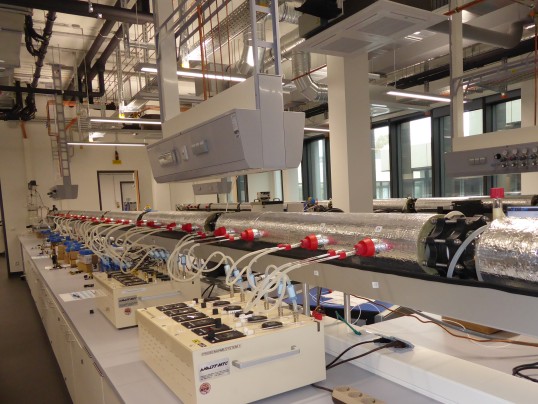 Proficiency testing (PT) is offered alternatively with and without own sampling. Participants may choose whether they wish to perform sampling for volatile organic compounds themselves, or to have the self-conditioned loaded sample carriers supplied to them [1].

The substance selection is based on indoor air quality issues and covers hazardous substances typically found in indoor workplaces.The concentrations to be measured will lie within the range between 10 to 200 µg/m3 for each substance. Analysis has to be conducted by gas chromatography by means of thermal desorption according to DIN EN ISO 16017-1 [2], DIN EN ISO 16000-6 [3] or IFA Folder No. 8936 [4].

The quantitative evaluation should be based on the substance, so please do not quote the results as toluene equivalent [5].

*Blank value correction:
According to the experience of the IFA, the system blank value is usually negligible. However, it has been shown that in the case of thermal desorption tubes, that substances are occasionally and non-reproducibly detected which can simulate a blank value. The IFA analyses several blank value samples per test. Should a significant plant blank value occur, the participants are immediately informed by e-mail. A blank value correction based on the own blank value samples should only be carried out after consultation with the IFA and only if the substance concentrations that occurred can be clearly and reproducibly traced back to the own tubes.

1 Proficiency testing with own sampling

A large-scale dynamic test gas stream can be found at the IFA. It is suitable for parallel sampling by up to 25 participants.

The registration for the PT schemes with own sampling is valid for only one person per participating company or institution. If you wish to participate with more than one person, please contact us in advance.

Participants will receive detailed information on the PT, a description of the apparatus and the connections for the sampling devices in particular, and a list of the substances to be analysed in good time.

2 Proficiency testing without own sampling

The production of samples for volatile organic compounds is conducted at the dynamic test gas stream of the IFA. The particular feature of this PT scheme is that thermal desorption tubes (e.g., Tenax-TA) are employed for loading which must be conditioned by the participants prior to the PT. Each participant (analysis laboratory) submits eight thermal desorption tubes to the IFA. The sample tubes and the blank value tubes will be loaded with a sampling volume of 2 L. Only personal air samplers are used at the IFA. The sample carrier should not generate a back pressure exceeding 5.0 kPa under the specified conditions. Where internally fabricated sample carriers are used, please supply an adapter (GL14/GL25 threaded connection) for the test gas stream.