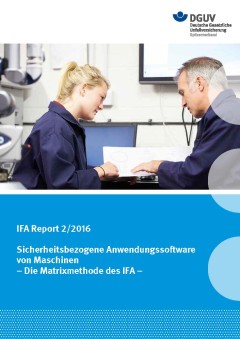 The increasing automation and networking of industrial processes places particular demands upon the reliability of machine controls. The IFA conducts research and consulting in this area and provides numerous practical resources.

Manufacturers in the machine construction sector are increasingly using application programming of safety controls in order to implement safety functions. The current EN ISO 13849 and EN 62061 standards are the first to define requirements concerning the development of software employed for safety functions. The requirements are intended to prevent hazardous systematic errors in the safety-related application software employed for a machine. The essential requirement imposed by these standards is the observance of a structured development process: the V model. The further requirements concerning measures for the avoidance and control of errors during development are also formulated in the standards in the usual very general terms. Furthermore, few examples and proposals for implementation of these requirements have been published to date. Interpretation of the standards during software development in machine construction is therefore often unclear, and presents difficulties during implementation. This situation prompted the launch of a project (FF-FP0319, project term 2011 to 2013) funded by the DGUV and conducted at the Bonn-Rhine-Sieg University of Applied Sciences. In the project, which was conducted in conjunction with machinery construction companies from the region, a development method suitable for application in the field – the IFA matrix method – was formulated and documented in a research report together with a number of examples. This research report forms the core of the present IFA Report. The IFA matrix method described here can be used to specify, validate and document the application software of safety functions in accordance with the standards. The report also provides further information on application programming for safety-related machine controls. Application programming for standard controls typically entails greater effort than for certified safety controls. Several chapters of the report therefore refer to the application of standard controls. In order for the IFA matrix method to be implemented efficiently, the IFA is developing SOFTEMA, a software tool. The examples in the report are available for download and can be viewed by means of SOFTEMA.