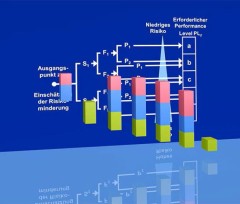 The increasing automation and networking of industrial processes places particular demands upon the reliability of machine controls. The IFA conducts research and consulting in this area and provides numerous practical resources.

On complex machines in particular, the operator's safety is dependent upon the reliability of the control system. EN ISO 13849-1 serves as a basis for evaluation of the safety of complex machine controls. For application of this standard, the IFA provides the following resources for download:

Practical application of the standard is the focus of BGIA Report 2/2008e, "Functional safety of machine controls – Application of EN ISO 13849" and IFA Report 7/2013e "Safe drive controls with frequency converters". The reports were written as tutorial and reference documents. They contain everything needed, from risk evaluation of the control system, to detailed verification of its safety – supported by numerous applied examples. The individual steps to be performed are explained systematically. The non-quantifiable aspects, such as fault avoidance during design and in software, are also explained in detail. The comprehensive explanations of the standard's content are supplemented by extensions and resources developed in the practical application. 52 examples of the most diverse control applications, described in detail and analysed by means of SISTEMA, complete both reports.

The "SISTEMA" PC program (Safety Integrity Software Tool for the Evaluation of Machine Applications) clearly describes all aspects of the analysis procedure contained in the standard for determining the probability of failure of control systems. SISTEMA contains all the data needed to assist the user in selecting and managing the parameters which are important for a control system. Use of SISTEMA is intuitive: wizard, help and report functions simplify operation and documentation of the inputs.

In order to simplify the handling of SISTEMA software an open series of SISTEMA Cookbooks is available. It will be supplemented gradually. The cookbooks describe the preparatory steps for input of the data into SISTEMA, and provide information on particular technical aspects of the SISTEMA software.

For the purpose of determining the Performance Level (PL) of safety-related machine controls, the IFA developed a practical calculation disk, in co-operation with the ZVEI (Zentralverband Elektrotechnik- und Elektronikindustrie) and the German Engineering Federation (VDMA). Selection of only a small number of parameters is sufficient for the average probability of failure PFHD and the PL to be determined.

The normative requirements governing safety-related machine controls are set out in close detail in the applicable safety standard, EN ISO 13849 (formerly EN 954). After ten years' successful application, Part 1, "Safety of machinery – Safety-related parts of control systems: General principles for design", was subjected to a thorough revision and republished in 2006. The proven requirements, such as division into five Categories defined according to the structure, together with a mathematical assessment of the probability of failure, have been taken into account by the new concept of the "Performance Level" (PL). Even where a system has largely been designed in accordance with the proven Categories and safety principles, the revision has not simplified the evaluation of machine controls. The update of the subject-matter also takes account of new technologies such as electronics and software. In order to implement the new concepts, users in industry and test bodies therefore require practical guides to the standard's interpretation and application. Amendment 1 of EN ISO 13849-1, resulting in the third edition of the standard in 2016, adopts some of these concepts developed through practical application.

The IFA played a major role in the revision and amendment of EN ISO 13849-1. As a result, it was possible for the comprehensive experience gained during research and product testing to be channelled back effectively into the standards development process. The reverse was also the case: the close co-operation enabled the essential changes to the standard to be communicated at an early stage through publications. The IFA resources which are continuously updated and made available free of charge support the parties applying the standard (small and medium-sized enterprises, manufacturers and operators of safety components and machines, test bodies, prevention departments of the accident insurance institutions) both during familiarization with the new subject-matter, and in their day-to-day evaluation of real-case concepts.