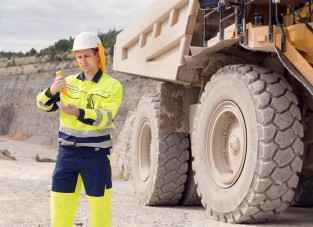 Suitable clothing, sunglasses, sun protection for the neck and sunscreen protect against UV radiation – during both work and leisure.  (Photograph: Wolfgang Bellwinkel/DGUV)

In other words: the risk of suffering a reportable accident at work was lower last year than it has ever been before. This drop can be observed across all sectors; only in the trade sector was a small increase observed. Overall, the risk of accident in the construction and transport sectors lay substantially above the average, and in the health sector, the civil service and administrations, substantially below it.

"The trend shows that progress is possible," says Dr Joachim Breuer, Director General of the DGUV. For further improvements to be achieved however, he considers it imperative for safety and health to be established as a generic issue in companies. To this end, the German Social Accident Insurance is aiming to reach companies with its new "kommmitmensch" campaign. "Companies benefit directly from investment in prevention activity – through lower rates of absence from work, increased productivity and motivated employees."

Occupational diseases: increase in the number of cases of non-melanoma skin cancer

Overall, the number of cases of the most common occupational diseases fell slightly compared to the previous year. The total number of cases in which suspicion of an occupational disease was confirmed fell by 4.9% to 38,080. Of these, around 18,400 cases concerned work-related eczematous dermatitis, caused for example by wet work (2016: 19,641). In 6,649 insured individuals, the German Social Accident Insurance Institutions confirmed a work-related hearing impairment (2016: 6,850). Non-melanoma skin cancer, the third most common occupational disease, was however an exception, with an increase of 165 cases.

In the light of this, Breuer calls upon companies to invest more in protecting employees who spend a large part of their working hours outdoors. "Non-melanoma skin cancer is preventable. The risks presented by UV radiation can be managed well by technical, organizational and personal protective measures." Employees must share the responsibility however, says Breuer: "Measures to prevent cancer are not limited to working hours. Protecting one's skin also means not sunbathing in bright sunshine at the weekend."

By contrast, it is too late for preventive measures to be taken against the group of diseases caused by asbestos. "We are now witnessing the consequences of the reckless use of this hazardous substance in the previous century," says Breuer. In 2017, the German Social Accident Insurance Institutions confirmed a disease caused by occupational contact with asbestos in around 3,700 insured individuals. Asbestos was also the cause of the majority of the 2,580 fatal cases of occupational disease (2016: 2,573).

Average premium rate falling despite the increase in expenditure

Expenditure by the German Social Accident Insurance on prevention, rehabilitation, financial compensation and administration was around €13.2 billion in 2017 – an increase of €287 million or around 2.2% over the previous year. The average premium rate levied by the German Social Accident Insurance Institutions for trade and industry nevertheless fell from €1.18 to €1.16 per €100 total wage costs. Never before has the average premium rate been so low. "This development is however also attributable to the healthy economic climate," says Breuer. Remuneration, on the basis of which the premium is calculated, increased in 2017 by 4% compared to the previous year, to around €1 trillion.