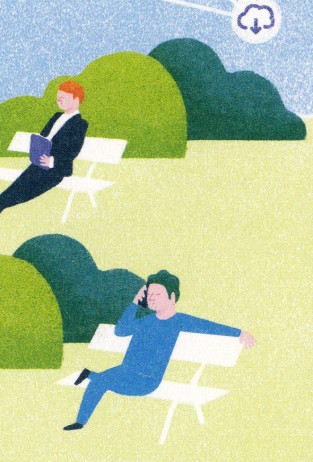 New forms of work call for new responses in order to protect employees at work. The German Social Accident Insurance Institutions are drawing attention to this on the occasion of the World Day for Safety and Health at Work (28 April 2016) by issuing a new publication. In this publication, prevention experts from the German Social Accident Insurance describe trends currently changing the world of work, and the resulting effects upon human safety and health. According to the experts, technological developments permit new ways of organizing work. This presents both opportunities and risks for occupational safety and health. It follows that consulting on prevention issues must promote a culture in companies in which high status is accorded to safety and health.

The responsible bodies in Germany – the German Social Accident Insurance Institutions for the private and public sectors – advise and supervise companies in matters of occupational safety and health. 'Our prevention services are witnessing how digitalization is changing day-to-day work in companies,' says Dr Walter Eichendorf, Deputy Director General of the German Social Accident Insurance (DGUV). 'Mobile devices make work more independent of time and location. Autonomous production systems – the buzzword is "Industry 4.0" – relieve employees of routine tasks. New management methods provide employees with greater freedom to structure their work themselves. All this should be considered positively, provided certain rules are observed. And new forms of cooperation, such as crowdworking, call past approaches to occupational safety and health into question.' Against this background, the publication "New forms of work. New forms of prevention" makes an important contribution to further development of the consulting provided on occupational safety and health. 'Work 4.0 calls for Prevention 4.0', says Eichendorf.

Many developments present opportunities to promote good health, says Dr Susanne Roscher, occupational psychologist at the VBG and one of the authors of the publication. For example, mobile terminal devices could help people to reconcile occupational and family life, and thus to reduce stress. New risks are however also emerging, says Roscher. 'We know for example that personal flexibility in structuring work has a positive impact upon health. Rigid targets and competition pressure within companies can however destroy this potential or even have the opposite effect when they create an incentive for employees to behave in such a way that they endanger themselves.' Such behaviour includes, for example, extending working hours, the consumption of performance-enhancing substances, or working despite illness.

Demands on workers are also influenced by Industry 4.0. 'Autonomous production systems can relieve human beings of routine tasks,' says Roscher. 'However, this does not mean that work becomes less demanding. Employees may in fact have to maintain high levels of concentration continuously when monitoring these systems for faults that rarely occur.' When something does then happen, it is not enough to respond to signals. 'The system as a whole must be understood, since its parts all interact with each other.' This increases the danger of mistakes being made, and therefore also the risk of employees feeling overextended.

OSH consultants are therefore called upon to find responses to the changes in the world of work, says Roscher. Together with other experts, Roscher – the head of the DGUV's "New types of work" subcommittee – has formulated the challenges facing prevention activity in the future. One of the most important tasks, she says, 'is for prevention to be established as a corporate target in its own right and as a part of corporate culture. The effects upon employees' safety and health must be considered in all decisions, whether concerning setup of an autonomous production installation, or the question whether employees who have been issued a company mobile phone are obliged to answer work e-mails after the end of a working day.' The publication "New forms of work. New forms of prevention" can be downloaded here: http://publikationen.dguv.de/dguv/udt_dguv_main.aspx?FDOCUID=26557