Training shoes under the desk 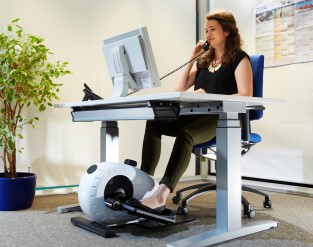 Cycling while working at your desk can have positve effects on your health (Photo: Huntstock/Getty Images)

Dynamic workstations that combine desk work with walking or cycling have been shown to have a good effect upon health without significantly impairing work performance. This was the conclusion of a study conducted by the Institute for Occupational Safety and Health of the German Social Accident Insurance (IFA). The results are available at www.dguv.de/ifa; Webcode: d972999.

18 million people in Germany work in offices and at computer desks, and this number is rising. Some of these workers often sit at their desks for hours without moving. The consequences of this constrained posture are a lack of movement and insufficient muscle workload. In the long term, this can lead to chronic harm, including cardiovascular diseases, Type II diabetes, and musculoskeletal diseases. According to the World Health Organization, physical inactivity is the fourth most frequent risk factor for early death.

Experts often recommend exercise outside work hours in order to compensate for the lack of physical activity at work. Many people are however unable to find the time for exercise during their daily lives. Dynamic workstations could be a solution. These replace or supplement the office chair with exercise elements such as treadmills, elliptical trainers or steppers. Such products are already on the market in the USA.

To what extent do such measures have a positive influence upon physiological variables? How do they affect work performance, and how well are they received by the workers? These questions were addressed systematically by the IFA in conjunction with the TNO, the Netherlands' "Work and Employment" institute. For this purpose, two types of dynamic workstation were compared to a conventional seated workstation and a conventional standing workstation.

"Physical activity, heart rate and energy expenditure are considerably higher at the new dynamic workstations," says Professor Rolf Ellegast, Deputy Director of the IFA. "Depending upon the form and intensity of movement, the total energy expenditure rises by up to 100%. In effect, you take your evening stroll at your desk." The work performance remains largely unaffected by the activating measures, says Ellegast. The test subjects nevertheless expressed reservations concerning this form of workstation, unergonomic design and distraction being the significant reasons.

Says Ellegast: "Even though the dynamic workstations still require improvement, we can already conclude that in principle, they can contribute to improving the health of employees."

Promoting physical activity at work is also the objective of the "Think of me. Love, your back" campaign. The campaign is a joint effort by the German Social Accident Insurance Institutions, their umbrella association (DGUV), the Social insurance for Agriculture, Forestry and Landscaping (SVLG) and the Federal Miners' Insurance Institution (Knappschaft). Together, these bodies are pursuing the objective of reducing back stresses.